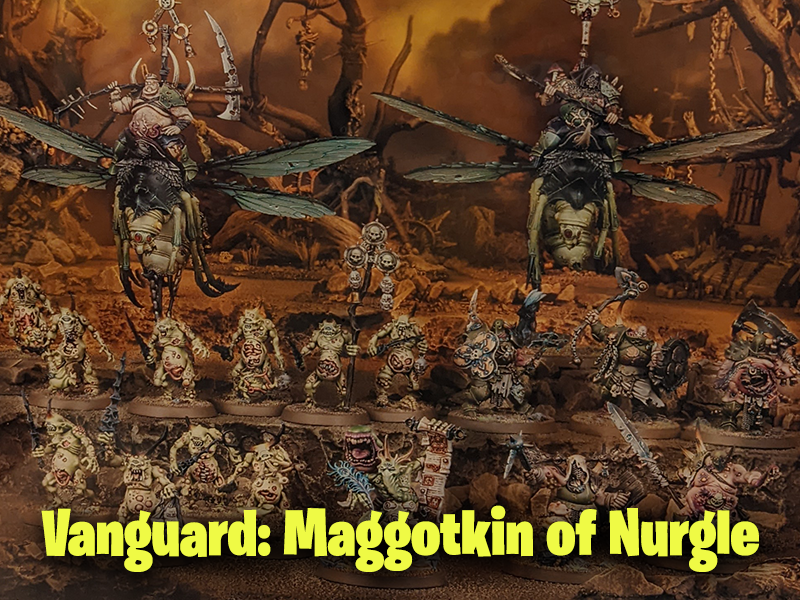 Games Workshop kindly provided me with a preview box of the new Nurgle Maggotkin starter box, the first of the new Vanguard products which are in the same style and price bracket of the Combat Patrol boxes for Warhammer 40,000. I wanted to give my thoughts on the contents of the box, as a collector and painter of Nurgle for Age of Sigmar this product immediately appealed to me.

First up, I won’t be speaking about any rules content here as I do not have the new Battletome yet – I’ll give my thoughts on that in the next week or two once it’s arrived.

This post contains affiliate links, and the review product was provided free by Games Workshop.

So inside this beefy box you get 18 miniatures:

With the box going for an RRP of £78.50 this works out at a hefty saving of around £40. And as a collector and painter, you get a good mix of both daemonic and mortal units to get your brushes around.

My favourite kit in this set is the Putrid Blightkings. Ever since they first stepped onto the battlefield during the End Times of Warhammer Fantasy, these models have stood head and shoulders as some of the coolest in the whole Warhammer range. Despite getting 5 models to a box, the kit is absolutely chock full of options when building them, meaning no two units are ever likely to be exactly the same in your army. These guys have been a key part of AoS Nurgle forces since the start, so having them in the Vanguard box already means you’ve got a very hard-hitting unit.

Here you can see one of my units of Blightkings – there’s plenty of fun to be had with all the unique features across these models. Each is akin to a character model rather than part of an organised unit, so you could go to town with the details. You can see that I painted eyes in the belly of the bell-carrying fellow! I also added an Orruk skull to the shoulder pauldron of one of them, a trophy from a previous battle!

The Plaguebearer kit is a little older, dating back to around 2012. It’s still a nice kit and a great way to get started painting if you’re a newer or less confident painter. You can achieve great results by simply giving them a paintjob with Contrast paints or even just washes if you prefer. You’ll definitely want to pick up more of these though – Plaguebearers generally work better in units of 20-30 models so to capitalise on these chaps you’ll need to expand with a couple more boxes of them. I’m assuming they’ll also buff up strongly with models like the Spoilpox Scrivener included with this set, as well as characters like the Sloppity Bilepiper.

The two Pusgoyle Blightlords are the most eye-catching models in the box. Two huge, bloated rotflies being ridden by elite models in the same vein as the Blightkings. These are imposing and tall models with a lot of interesting textures such as fur, wings, bloated skin and worn metal armour. Easily the most intimidating of models to paint, but if you paint your Blightkings first you’ll be surprised how easily these models come together when you sit down to put paint on them!

I’d recommend this video from Warhammer on Youtube if you need a hand on painting the wings of the rotflies – they’re large areas and definitely benefit from a bit of extra attention. The rotflies are a little trickier to assemble than most of the other stuff in the box, so take your time with them – the legs are a sort of ball and socket joint and it’s easy to knock them out of place if you rush the assembly.

One last note that I really like about this box is you’ll end up with a LOT of spare bits and gubbins for your bits box. The blightkings in particular have so much stuff you’ll be able to use on your other Nurgle models!

I’m not sure I’d change a lot about this box myself, if I was being picky I might say I’d prefer the Sloppity Bilepiper over the Spoilpox Scrivener because I like the model more – but it might be that the included model is the better choice from the Battletome.

That said, I think this is a fabulous box for new and existing Nurgle players – it’s certainly just the boost my own force needed (in addition to the new Rotbringers Sorcerer).

Will you be picking up the Maggotkin Vanguard box? Let me know in the comments if you’re grabbing one! As for me, I’m going to be waiting patiently by the door next Saturday morning hoping for my battletome and dice order to arrive!