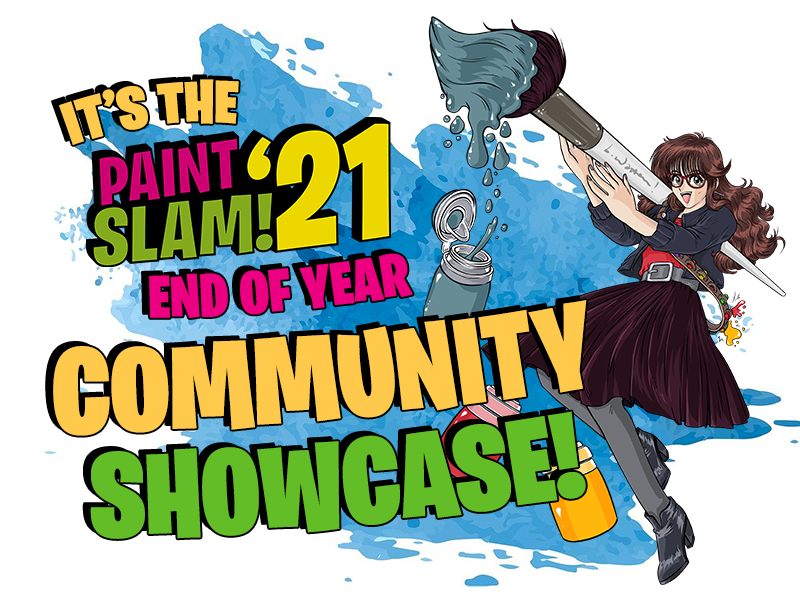 And so we come to the final day of 2021, and what better time to look back at the year as a whole with one huge Community Showcase, where members of the PaintSlam discord picked two pictures/models/units from their year and tell us a little about it? This is the written version of the showcase, but you can actually watch the full 3 and a half hour live streamed version right here:

If you want to take your time to admire the images up close though, this article is the perfect companion to the stream! Why not listen to the stream and zoom into the beautiful photos below for a closer look?

So without further ado, let’s take a jump into your favourite works from 2021! And remember to get involved with PaintSlam22 starting TOMORROW!

There two are the models I am most happy with this year. Finishing my 2k marine army has been my main project. Both of these let me try different colour schemes within the same army. Was also fun making a custom head for the techmarine by cutting two in half :3

It’s so hard to choose…

I think first it will be the Skeletor color themed sorcerer from HeroQuest. It’s one of my fav minis, my fav game (look at my username). This mini is a big improvement for me, managing the light, practicing a more cartoonish effect.

The second is also a sorceress, kitbashed from AoS Slaanesh minis, for my King of War army. Same thing, I did a very good job with cartoonish effect (and managed to freehand an easter egg).

First choice was easy: Galadriel, Lady of Light! A really understated model and a really simple paint scheme but a character I utterly love, and over all despite the lack of technique or detail I’m really proud of her.

Second I’ve gone for Leia Organa. This FFG sculpt isn’t the best, and neither is my painting, but none of that matters. It’s Leia, it’s Carrie Fisher, and both the character and actress are amazing.

Two group photos – my Blood Bowl team inspired by old black and white Hammer Horror movies (apologies for the photo, I had to cobble together a set-up from what I had to hand with most of my life in cardboard boxes!). It was weird, having a pallet with only black and white paints on it, mixing them to make many shades of grey. And the neon green colour as a spot colour on the eyes.

My favorites from this year are:

The Chaos space marine Exalted champion kitbash Anja the Hound that i planned for a long time.

The Spire tyrants for Warcry was great for skin tone testing and training and it all turned out pretty good.

My PaintSlamming feel off a cliff in the second half of the year (life happened), but I still got through some minis I was pleased with. In particular, the Custodes Command Bros here came out surprisingly well for a glorified coat of Leadbelcher and generous use of metallic sharpie, and the Cold One/Drakespawn Knights were great fun to paint, even if they were too pointy to properly photograph in my tiny flat.

My T’au Riptide is the biggest single model I’ve painted so far, and had a lot of fun with it. a real centrepiece for my cadre! also recently painted the Ironstrider that I had on my pile for about a year, with a sneaky lil pathfinder on the base. purple is the stealthiest of all the colours after all!

Dragon Princes as they were a unit i thought i would never finish due to how fiddly the models are and they turned out better than i expected, also marking the first time ive freehanded anything and it wasnt a disaster.

White lions as they were the first unit i finished this year after id decided on my original goal to fully paint 2.5k of High Elves, so they showed me finishing units is actually possible. plus they’re awesome.

The Tau Kill Team was my final project of the year and was so satisfying to do as I felt it was the peak of my efforts this year. My best highlights and colour balancing IMO.

For image 2 its the models that featured Owls I did this year, which was a fun mini theme I happened to do. I wanna fit in more on my models.

Excuse my terribly messy desk and terrible photo quality. I’m so proud of how the insert for this came out! Also it was super fun to paint over the clear plastic!

The only two I’ve actually finished this year are my Christmas minis so I guess I’ll pick them haha I only really started getting my mojo back towards the end of the year so I’m hoping to get more done next year and be more involved with the community too.

Easy choices for me this year… the Rogue Trader Space Marine with shuriken catapult that I painted for the Paintslam Golden Oldies month seemed to be appreciated by a lot of people. I enjoyed the whole process of building and painting and it features one of the first banners I ever did by hand.
Eldrad Ulthran, on the other hand, is probably the best miniature I’ve ever painted and I hope I can kick on from here and improve further.

I painted this guy up as a display piece, because i wanted to see how far i had come as a painter. i still have the original model i painted 15 years ago and suffice to say, there is a distinct difference 🙂

Painted this guy up very recently and very happy with it, i loved the model, the sculpt and once i got past how violently bright the orange was i loved that too! definitely my favourite model ive done in this hobby 🙂

These two are probably my favourites of this year, although gluing the ~300 skulls to Nagash’s base was a lot of effort

I entered my first ever painting competition this past weekend, and I couldn’t think of a better demonstration of my overall hobby progress in this past year. I’ve gone from painting a few times a month, to a few times a week, now to a few hours a day and I’m quite literally living my dream. I’m so proud of these models, and I’m even more proud to say that I actually won in the Arcadian Brush comp at PAX U with this Rasputina model. The robot was entered at the advanced level, and while it didn’t place, I’m really happy with how it turned out! Between the contest and my minis being used for the Castle Panic kickstarter, I have so many awesome benchmarks of growth for me to measure this year personally and artistically. I’m trying to grow my following on Instagram, so if you like what you see, I’d be flattered if you’d follow :mischaLove: (www.instagram.com/jamiedaggers)

Seems my hobby peaked at the first model of the year with Venom.

I think these are two of my favourite this year, the ‘Commissar’ was a gift for a friend while the wizard is obviously planting a flag

My two coolest projects from the last year: my Knight Repentia and Sisters unrepentant!

The knight was a big centre piece for my sisters army, the idea is that its a colossal version of a normal anchorite. It was kinda the end point of messing about with the SoB range after getting started with the Unrepentant sisters way back in summer. That lil gang aint nessisarily my best painted minis, but i love the freehand graffiti on the statue. Hoping to fine tune those skills in the coming year 😤

While I didn’t get much painting done, I did finish this metal Harlequin troupe and I’m very proud of them

My favorites: The first is a goblin alchemist that I found on Etsy. I tried to push myself and used a lot of techniques that I learns this year, such as layering. The unit are some naiads for Kings of War. This was the first time I used my airbrush to lay down a base coat for a bunch of models.

Hard to choose as I managed to paint a lot this year, but the satisfaction of stripping my awful paint jobs from age 13, and restoring and repainting my HeroQuest set is a definite hobby highlight (project still ongoing!)

My 2 offerings. Finally finished my Stardrake to lead my SCE army, was really pleased with the final colour choices. My ork Kill Team was a big progression for me, new skin recipe was a success & these models were a good representation of my #Orkaday project of 31 orks in 31 days

Okay, so, sitting at a grand total of 6 painted minis this year, i didn’t have a lot of choice for what to show off but… These Deathwing Terminators are just some of the best things i’ve ever painted. And given that while i only painted two this year (The sergeant in the middle and the in the back left) I didn’t base any of the squad until 2021 so Jess said it counts. Also, i’ve included some picture in picture of the blood remains of their enemies I put on the bases, just because i’m particularly fond of those two (and blood effects are fun). The CSM is supposed to be a Fallen (and he can’t get up) and the colours for the head is based on a Baron of Hell from doom.

The Librarian (which, like the terminators, is also from Dark Vengeance) is just, in my opinion, my best paint job ever. I’m so happy with how the blue armour turned out, and that robe is also looking amazing, (also, while you can’t see it, because the hood makes it hard to take pictures of it, It’s also the best face i’ve ever painted.). I’m really looking forward to the day I get to push him around a tabletop casting spells at people.

The single model I’m most proud of that I painted this year is the Ravenwing Master on his trusty destrier, B’aikh I kitbashed. It was an idea I’d had for a while and was extremely fulfilling to see come to life.
I was also happy to finish a little painting project I started a few years ago but never got around to finishing until this year, my Metal Gear inspired Assassins.

Really pleased with how the Runelord ended up, one of my first minis back after 20yrs our of the hobby

Really pleased with Morathi; the first time I worked on a mini on this scale

Alarielle was a model I’ve wanted to paint since I joined the hobby, but always felt extremely intimidated by. But, having bit the bullet, she is easily one of my favorite models I’ve ever painted, no contest.

Aaaaaaand…. breathe! That’s it! PaintSlam21 is officially capped off and finished, with a nice ribbon and bow around the package. How did you get on with your hobby log? Did you impress yourself with how much you got painted? Let’s do it all over again in 2022 with PaintSlam22 – I look forward to enjoying another awesome year of hobby with you all!