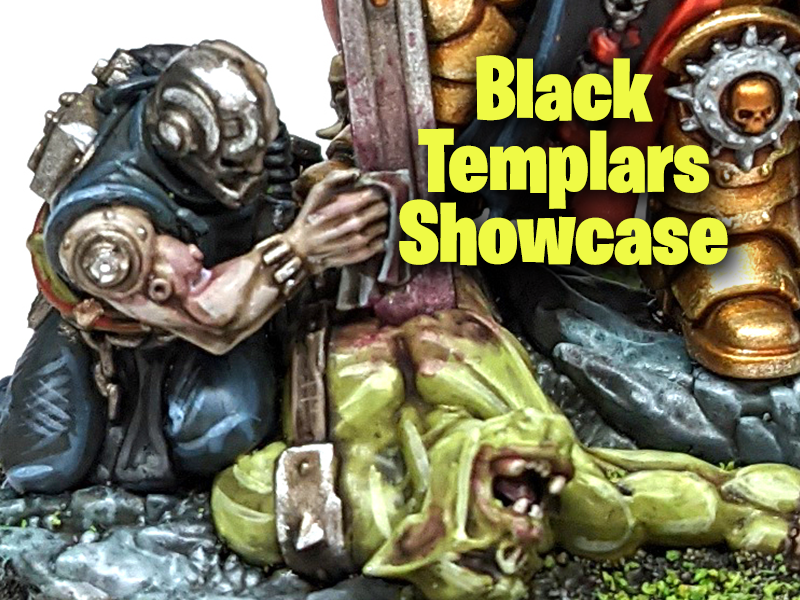 Games Workshop was kind enough to send me a selection of the new Black Templars models free to paint up for the Warhammer Community website at the end of October, and I was delighted to see my work on the post! In this blog post, I want to show you folks a few more angles and pictures of what I painted and talk a little about them 🙂

This was the first model I tackled, and the one which I probably spent the most amount of time on overall. I really tried to push myself with the black armour, as painting black power armour was something where I’d previously been quite disappointed in my results on earlier miniatures. In the end, the extra time spent trying to get it right was worth it and I’m very happy with the result. I used Dark Reaper and Thunderhawk Blue for the majority of the highlights, with some spots of Fenrisian Grey for the brightest dots.

I’m also pretty pleased with the result on the small tilting shield. Lacking a transfer sheet at the time, I wangled a rough approximation of the layout using decals from other transfer sheets including the black sword from the Dark Imperium space marines transfer sheet (I think it was a crusade symbol?) and then painted over the elements to try closely match the artwork on the box art.

The base was a chunk of slate, with assorted smaller stones and some battlefield scatter which I painted all with mechanicus standard grey, various washes and drybrushes of Celestra Grey.

I very much enjoyed painting Grimaldus too. The various robes and parchment were a nice canvas to try add freehand and texture to, as well as the small shields across his armour. Eagle-eyed readers may be able to identify the book at his waist, although how he got hold of such a tome is anybody’s guess. His servitors were the last things I painted as the deadline for the article approached, but I was impressed by the detail sculpted onto these, especially the candle-covered battle standard.

Helbrecht was quite a different task altogether compared to the other models. His shining gold armour jumps out against the grim black armour of his subordinates, though the black cloak he wears ties him in with the rest of the force. The Ork was an optional piece for the base, but it didn’t feel right not to use such an element in the build, plus it was nice to paint one of our fungal friends again for a change. I painted each of the heads separately, and have kept those unglued so I can pop in whichever head I feel like displaying at any given time.

For the blood on his sword, I wanted it to look like it was mostly wiped away, so I used Flesh Tearers Red contrast paint and then dabbed at it with a clean, dry brush until it left only a light staining on the surface of the weapon. I painted the servitor’s rag to be a little dirty, as if it had seen a lot of use already during the battle. I can imagine that Helbrecht stands arrogantly waiting for his sword to be cleaned after each kill during a fight.