I can feel the hive mind calling me.

I’ve always had a fondness for the miniatures from the Genestealer Cults. As far back as the very early models they had a distinctly unique character. So when they returned to the world of Warhammer 40k a few years back they immediately caught my eye again. However, over the last two years or so I’ve been trying to stick to a few armies and just expand upon those: Nurgle, Celestial Vindicators and Dark Angels. I’ve gone so far as to sell my Sylvaneth and Moonclan (shh, don’t mention the Gloomspite Gitz right now…)

Well I was doing quite well at resisting the call of the cults, until… 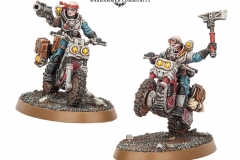 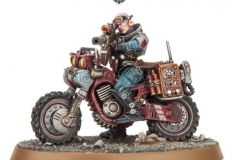 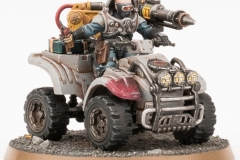 These chaps. The bikes and quad bikes just broke my resolve. I need these miniatures in my life.
And so it is that I picked up the Iconward towards the end of the year, and some of my good friends kindly bought me the Broodcoven set of characters for the Genestealer Cults too.

I’ve started, so far, just with the Iconward. That’s my current painting project.

I’ve only just started on it, but you can see I’ve gone for Orange and Grey as the main colours. I’m looking forward to working on this guy and getting it finished as my guideline piece for the army scheme.
Next up, I want to get one of each of the existing kits (including a box of Purestrain Genestealers!). I really like the Goliath and the Hybrids.
I’m not massively clued up on the lore or rules, but hopefully when the codex comes out I can have a read. I’m not much of a gamer though, so this army project is very much a hobby thing more than anything else. So my choices will be visual more than what’s a good army.
What would you suggest I add to the army first? What’s a nice small place to start? Let me know how you’d start a GSC army out!